History and Magic of Moisehén 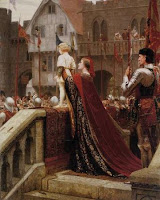 In the novel EOLYN, the landscape and people of Moisehen are revealed as Eolyn grows and comes to know her country. History is portrayed as subjective, and each character has a unique perspective on the events that gave rise to the prohibition against women’s magic in the kingdom.

Moisehén is a land-locked realm consisting of four provinces spread over hilly and sometimes mountainous terrain: Moehn, Selkynsen, Selen and the ruling province, also called Moisehen. The climate is temperate, the rich forests dominated by oak and other deciduous trees. (See the map below.)

Citizens of Moisehén consider themselves spiritual descendents of Aithne and Caradoc, mythological figures who were the first to practice magic. (You can listen to one of the legends of Aithne and Caradoc in my May 27 post, The Origin of Magic.) For hundreds of years a very structured system of sorcery thrived in the form of the ‘Old Orders’ of Mages (wizards) and Magas (witches). These orders formed the heart of Moisehen’s culture and provided the foundation of their power as a people and kingdom.

In the tradition of Moisehén, it was forbidden for members of the royal family to learn the ways of magic, on the conviction that merging magic and royal power would put too much dominion into the hands of one family. The prohibition was respected until Prince Kedehen, the fourth son of King Urien, chose to seek instruction in magic. No one would accept him as a student until he approached the wizard Tzeremond. While Tzeremond was part of the Order of Mages, he led an extreme faction that taught women's sorcery was unacceptable. The entrance of a man of royal lineage into Tzeremond’s school caused tension, but it was when Kedehen’s three brothers died and he assumed the crown that war broke out. The Order of Magas united against the young Mage King. The Order of Mages split and collapsed, with some mages supporting the King and others joining the magas. Kedehen and Tzeremond won the war. In the aftermath, magic was forbidden to women upon pain of death. Violent purges followed, and any magas and dissident mages who survived the war were hunted down, tortured and killed.

All of this comes to pass before the novel EOLYN begins, though this history is interwoven throughout the plot. Eolyn is the daughter of the maga warrior Kaie, who after the war went into hiding with her husband in a small village on the edge of the South Woods, in the isolated province of Moehn.

For more information about the history and practice of magic in Moisehén, check out the following posts:


The Foundations of Magic in Moisehén

Dragon  In the tradition of Moisehén, Dragon is a messenger of the Gods who appeared to the legendary figures of Aithne and Caradoc and taught them the ways of High Magic.

On Mages and Magas -- What is a maga? How is a maga different from a mage?

Primitive Magic is the most ancient and least understood form of magic.

Children's Magic is the magic of discovery and creativity.

Simple Magic is the knowledge of uses of plants and animals for medicine and food.

Middle Magic involves the learning the languages of the world, of the plants, animals and rocks.

High Magic requires the use of a staff and is the most powerful form of Advanced Magic practiced in Moisehén.