﻿
﻿ The Kansas City Ballet's performance of Ib Andersen's Romeo and Juliet was spectacular.

I have only one memory of seeing this ballet before last night; on TV when I was growing up. My most vivid image from that performance is Juliet begging her father not to marry her off to Paris.

Funny how that was the one thing that stuck, when the ballet as a whole is so richly woven in all its scenes.  Last night we were treated to brilliantly choreographed sword fights, passionate love scenes, grand masquerades, and a host of characters whose personalities were extraordinarily vivid, an especially admirable achievement when one considers ballet dancers are never allowed to speak their character's thoughts.  Everything must be commmunicated by bodily action and facial expression.

Here's some fun trivia about the history of the ballet.  Back when composer Sergei Prokofiev was trying to sell his idea, first to the Kirov Ballet, then to the Bolshoi, no one wanted it.  Why?  Because dead people don't dance.  Without the two principle characters alive at the end, there could be no grand finale.

Prokofiev refused to lose faith in his project, however.  He continued to perfect the score, and finally managed to convince the ballet company in Brno, Czechoslovakia, to take it on.  Romeo and Juliet premiered in 1938 with great success, and soon after ballet companies around the world -- including the Kirov and the Bolshoi -- were lining up for their chance to perform it.

After all the different interpretations I've seen of this tale of doomed love, one would think I'd be 'over it' by now, that the ending would cease to invoke an emotional response.  Yet last night when the curtain went down on the third act, I had tears in my eyes again.

To be fair, it wasn't just the story that got to me.  I was moved by the exquisite work of those wonderful dancers, by the grandeur of the production and the beauty of the new Kauffman Center for Performing Arts, and by pride in my home town of Kansas City, which now boasts a world-class ballet that is loved and supported by its citizens.

I was thinking during the third act, as I watched Angelina Sansone's wonderful interpretation of the character of Juliet, about the immortality that we give to certain characters whose stories for whatever reason never fail to inspire us, generation after generation.  Juliet is one of these characters.  How many times each year is her presence invoked across the globe?  In Prokovief's beloved ballet, in high school and professional productions of Shakespeare's classic play, in replays of old and not-so-old movies, in modern derivations of the original tale, such as Bernstein's and Sondheim's West Side Story, which itself has been subject to countless interpretetations and re-interpretations.

What would Juliet say, if she could speak to us about this propensity to bring her back to life so many times, and in so many ways?

Would she thank us for this immortality, for having allowed her story to transcend death itself?

Or would she say, "Enough.  I have lived this joy and this pain too many times.  Let me rest.  Let me be at peace."

This is one of the great paradoxes of story telling:  Characters are imagined, and yet they have a life of their own.  Every author has felt it; the tension between the power of one's own imagination and those frequent moments when one looks at what was just written and asks, "Now wait a minute.  Who's telling this story?"

There is a great novel that captures this dynamic, Halide's Gift by Frances Kazan, a work of historical fiction about the life of Turkish author Halide Edibe. In Kazan's telling of the story, Halide is heiress to a long line of women who have had the gift of hearing the dead.  But Halide hears no one, and spends much of her life believing she did not inherit the gift, until she starts writing and realizes the stories of her characters are made possible by the voices of the dead.

If Halide Edibe had been present when the Moscow theater manager rejected Prokofiev's ballet on the conviction that "Dead people don't dance," she might have argued otherwise.

I cannot say from a literal perspective whether she would have been right.

But figuratively speaking, the dead do indeed dance.

They danced for us last night; and I am deeply grateful for the stories they told.
Posted by Karin Rita Gastreich at 9:48 AM Links to this post

A Most Treasured Read 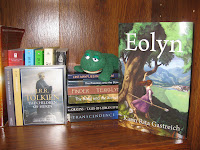 It's been a good week for reviews on Eolyn's Amazon page.  Three new reviews have been posted, all of them lengthy and detailed with respect to what worked and what did not work for them.  Coincidentally, each of the reviews posted this week also have some significant spoilers; so you may want to think twice before reading them through if you have not yet sat down with the novel.  In the meantime, here are some highlights:

Gastreich was able to weave recognizable bits of fairy tale, folklore and legend into the stories that surrounded Eolyn's childhood and education of her mystical inheritance. There's also a very strong thread of Feminism that runs through this book; and I mean that in an awesomely good way....The characters were so rich and intriguing, I absolutely loved them.

-Trish Heinrich (3 stars)
The threads woven throughout "Eolyn" are not, as with most other books in this genre, neatly tied off and snipped, and they do not form a perfect tapestry depicting "Happily Ever After". Some of the most important characters in the story are portrayed as complex personae with ambiguous morality and hidden motivations that are never revealed. It is this aspect of the book that readers will find at once disturbing and disturbingly realistic...

I cannot recommend this book highly enough, and it has already earned a place on my "Most Treasured" shelf. It is in a class of its own, and I hope to read more soon from Karin Rita Gastreich.

-Yin Haan (5 stars)
As a reader, there are certain topics or themes I really like in a book, certain tropes I particularly love no matter how many times I encounter them. Eolyn has a great many of my favorite fantasy tropes....The thing that made this book a joy to read and not just another familiar, commonplace fantasy novel is that each of these tropes were thoughtfully and deftly handled by Gastreich, often tweaked in satisfying and unexpected ways, and not just invoked as trite clichés that don't offer anything new or interesting to a reader...

I especially appreciated the feminist themes and questions of this book, which echo real life themes and questions in our world. (And isn't that precisely what good speculative fiction should do?) In the context of this particular fantasy world, Gastreich comments on sexism, sexuality, autonomy and personal choices, work vs. relationships, our relationship to our bodies and the natural world, and more. Her romance between Eolyn and the Mage-King feels true in its messiness and difficulties, and not just like a stereotypical fairytale.

-Julia Dvorin (5 stars)
Thank you Trish, Yin-Haan and Julia.  I am delighted that you enjoyed the read, and really appreciate you taking the time to write such thoughtful and detailed reviews.


In other news this week:

Author Terri Guiliano Long is hosting the celebration For the Love of Love on her blog.  Over forty authors are posting short vignettes about the experience of love.  The event started on February 14 and will continue through February 22; I will be posting on February 22.  Please stop by to read the different contributions.  You can vote for your favorite every day, and by doing so will be entered in a raffle to win some fun prizes.  More information is available at Terri Guiliano's blog.

On Heroines of Fantasy this week, we've been talking about heroes, and especially heroes in love.  Please stop by to read everyone's thoughts and to share yours.  As always, it's been a fun discussion.  I'm looking forward to seeing you there.

Wishing everyone a great weekend!
Posted by Karin Rita Gastreich at 4:50 PM Links to this post

Email ThisBlogThis!Share to TwitterShare to FacebookShare to Pinterest
Labels: For the Love of Love, Heroes in Love, Heroines of Fantasy, reviews of EOLYN

A Season for Love 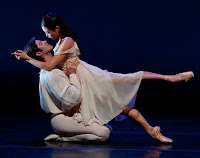 Last night I purchased my tickets for the Kansas City Ballet production of Romeo and Juliet, opening at the Kauffmann Center for Performing Arts next week.  I haven't seen the ballet in years, and I don't believe I've ever had the opportunity to see it live.  I am very much looking forward to the performance.

Romeo and Juliet has me thinking, once again, about Epic Love, a topic I wrote about on this blog some time ago.  Epic Love continues to be one of the most visited posts on this site.  I may return to the topic of Epic Love next week on Heroines of Fantasy.  I would definitely like to write something about love; we'll see what the muse inspires.

In the mean time, this week on Heroines of Fantasy Terri-Lynne DeFino has invited us to rewrite the story of Valentine and his true love Adalaide.  I have to admit, we're off to a kind of rocky start.  Last time we did a group story, it worked out really well.  But this week everyone seems to have a different story in mind; and it's not always clear that any given set of phrases is following from what was written previously.  I'm going to blame this on a syndrome Costa Ricans would call malenamorado -- We must all be distracted, in a bad way, by love.  Please stop by and help us straighten out our love story.

Speaking of love-related events, I've been invited to participate in a celebration of love on the blog of Terri Giuliano.  From February 14th through the 22nd, more than forty authors will post on her site about various topics related to love.  Guests will share their thoughts on love and family, friends and animals; on passionate and contented love; on love of food, music, language and writing. I will be up with my own post on February 22.


Visit Terri Giuliano's “For the Love of Love” event to vote on your favorite posts and have a chance of winning a unique prize: one voter will be chosen to have a character named after them in Terri’s next book! Two runners up will also win signed copies of Terri Giuliano Long’s bestselling novel, In Leah’s Wake.

That's the news for the moment.  I hope you are all having a lovely week.
Posted by Karin Rita Gastreich at 8:12 AM Links to this post