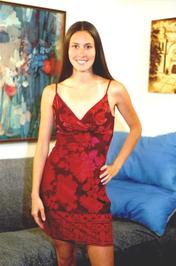 I met Jini through Goodreads, and have read her first novel Maginaugh.  Jini brings to vivid life a world few fantasy authors have explored:  Maginaugh is set in North America some 9,000 years ago, in a lush territory inhabited by three very different cultures.

Jini is 39 years young, writes songs as well as books, plays guitar, does yoga daily and loves to play tennis and swim in the ocean at Vero Beach, Florida, where she lives.

In addition to Maginaugh, Jini has published a second novel in the series, Maahilund. She is currently working on the third novel The Fair and Fey, and anticipates it will be available sometime mid year.

Please join me in welcoming Jini, and don't be shy with your questions and comments about her wonderful new series and the fascinating world it depicts.

Hello to all Karin's blog readers. I'm happy and honored to be here as her guest today. My pen name is J. Ellyne and I'm the author of an epic adult fantasy series with the first two books published and the third almost finished. You can call me by my real first name - Jini. Today we're going to talk mostly about the first book, Maginaugh, but let me tell you a little about the series as a whole first. The protagonist is a strong female character with an interesting background and an even more interesting future. More about her later. The series is called The Fair and Fey. The specific genre is adult, erotic, alternate-history, fantasy. Each of the three books take the reader to a different world. Each world is in a place you might recognize within our real world but the events that take place there are events of fantasy - or are they?


Maybe these events really could have happened. I did a ton of research before and during the writing of each book, to make the worlds as real as possible. The research included names of real people, religious beliefs of the time, folklore of the place and period, and scientific evidence of things that might otherwise be thought of as fantasy. To me folklore of ancient times was the most interesting part of my research. No one wrote history books until relatively recent times. So what we call mythology is sometimes simply an oral history, passed down by word of mouth. Of course facts can get stretched when repeated from one story teller to the next. Maginaugh, for example, is set in a time approximately 9,000 years ago.


In her review of Maginaugh, Karin mentions that the setting is quite unusual for a fantasy. I wrote about the region where I was born and where I spent every summer, even after I left my hometown. This was the upper peninsula of Michigan where I used to take walks in the north woods much like my characters do in the book. I used to paddle canoes just like they did. I even once made myself a deerskin shirt, just like my protagonist in the book wears.


My main character's name is Sashegh and I have to admit that much of her is based on my personality and my experiences. In the book she experiments with her sexuality as have I. She marries a man who is similar in some ways to my husband and has a female lover who is very similar to someone very special to me. Oops, this is getting quite personal isn't it? Maybe it's more than you want to know?


I want to tell you that what inspired me to write was a love of the books I was reading at the time I began, in particular Stephen King and Tom Robbins. My favorite book of all time is Robbins' Jitterbug Perfume and my favorite series of all time is King's Dark Tower. I bought everything they wrote. I have to say I more consistently enjoyed Robbins. I'm not into horror stories at all so it's hard for me to read some of King's stuff. I read him for his fantasies. I love being taken to fantastic other worlds and that's what I hope to do for all my readers.

So when I found a book of King's called On Writing, I was eager to read what he had to say about the art of writing. It was way better than any English composition course or writing workshop could ever be. To me, it's the bible for anyone who wants to write well. And, it's inspirational. It gave me the kick in the panties I needed to begin a novel and stick with it to the end. It's lots of work believe me and most published authors will tell you the pay's not great.


So when I started writing, I used fantasies I had as a young girl, playing Indian in the woods. Gradually my protagonist, Sashegh, being the strong character she is, took over and did her own thing. I just followed her around and wrote about her adventures. Strangely they seemed to parallel many experiences I've had in my own life. I guess I have a lot in common with Sashegh. So the book took an unexpected turn (even to me) halfway through when something surprising happened to Sashegh. I won't tell you what though; it would be a spoiler.


My favorite character in the book is Nanong, a native american. What a man he is: strong, handsome, brave, loyal, faithful, and a terrific lover. I still get all gooey when I think about him. No, Sashegh doesn't get to sleep with him, I'll tell you that much. He's too much older, he's faithful to his mate, Sashegh already has a man/boy when she meets him, and she has her eye on a certain girl instead. But if he wasn't taken .... hmmm.


Anything else anyone wants to know about me or my fantasy novels, please ask. I will be monitoring this blog thread and give answers.

Posted by Karin Rita Gastreich at 6:00 AM