The World I Want to Live In 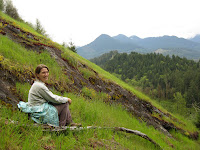 I lost an opportunity yesterday because of fear. Let that be a lesson to us all.  (I suppose I should add here, that one of the underlying themes of EOLYN is the debilitating power of fear; how so often it is the fear of danger -- rather than danger itself -- that proves the greatest obstacle to attaining our dreams.)

It was my idea to hike up to the meadow overlooking the fourth reflection plot, a relatively recent clear cut (‘recent’ being, in my estimation, about 10 years old). The plot is a mess to walk through. Splintered stumps of dead trees litter the area. The tallest saplings are now up to four meters high, densely packed, with a thorny net of dry ferns, broken twigs and sprawling raspberry bushes underfoot, the latter just beginning to show their happy white flowers. It was almost impossible to navigate the area without getting cut, scraped, tripped up or otherwise waylaid as we tried to reach that meadow.

The brambles didn’t bother me, though. What bothered me was how steep the slope became as we approached the summit. 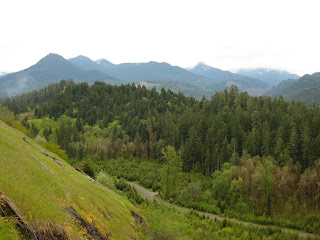 There were simple treats to distract me from the increasingly difficult climb for a while, like a small flat area where the weight of large animals had beaten down the grass into neat oval shapes. A resting place for deer, we concluded, judging from the tracks and the scat. 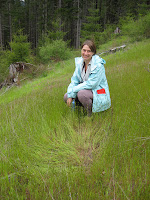 Also, the flowers were stunning: 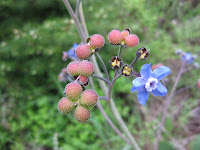 ...and there was a beautiful burgundy moss that grew in cushiony patches over the (nearly vertical and rather slippery) charcoal-colored rocks. 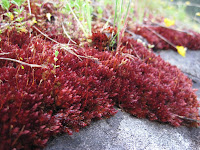 With a little help from my intrepid husband, halfway up I found a place where I could squat against the hillside and observe the landscape: a rugged chain of mountains covered in verdant stands of trees interrupted by patches of impossibly steep slopes, where the earth has been robbed of all greenery due to clear cutting. 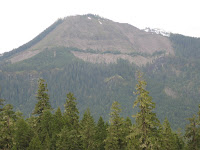 I have to admit, it surprised me to see so much clear cutting on such a large scale in my home country, given the wealth, expertise and technology to which we presumably have access. I am no expert on forestry, but I learned a lot about management plans and different approaches to logging – particularly in mountainous areas with valuable forest -- during my years in Costa Rica. It now seems to me that this tiny Central American nation has a much better handle on how to make efficient use of its resources, and how to mitigate the impacts of logging, than we do.

This was about all I had time to think about before looking down made me dizzy, and I began to fret about how I was ever going to descend that slope, having made it this far up. As for Rafael’s enthusiastic suggestion that we ascend at least a little more – no way was I going to do that. At my insistence, we moved horizontally along the hill to a nearby plantation, and there found another path back down to the road.

Of course, once we returned to the car, I looked up at the meadow and wanted to be there again, and kicked myself for not being able to stay in the first place, or climb even higher, as it would have been a wonderful spot to write a full reflection -- my last reflection as a writer-in-residence at Andrews Forest. But what was done was done.  The opportunity to stand upon that particular meadow had come and gone.  At least I could say I’d given it a try.

So I sought comfort in a little hot chocolate, and then ventured back a short way into that bramble-carpeted stand of young firs to finish my thoughts on the impacts and aftermath of clearcutting. 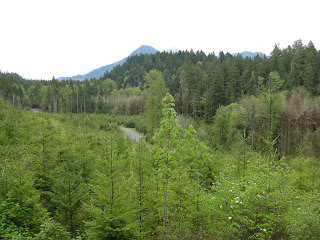 When Tim Fox first showed us this site, he mentioned the Long Term Ecological Reflections program was thinking about locating a more recent clear cut for use by the writers-in-residence. I see the importance of having a barren landscape evaluated by the writers-in-residence, but I also think it would be useful – as long as LTER is going to be at this for another 200 years – to have authors continually visit the same harvested patch, to follow its growth and recovery after clearcutting, which probably constitutes the largest single impact humans can have on a stretch of forest. 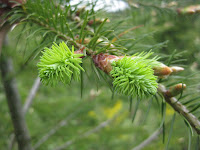 As I mentioned earlier, the trees here have reached about 4 or 5 meters in height. They are uniform in their Christmas-tree shape, and crowded tight in their intense, albeit slow-motion, struggle to see who gets to be the next 400-year-old giant. (Though whether they will be allowed that much time is a mystery to me; whoever manages this piece of land may have other plans.) The tips of their branches are studded with the buds of new leaves, fresh and pale green, soft as feathers to the touch. 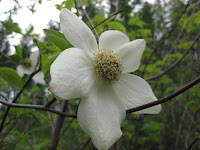 Interspersed among the young conifers is the occasional dogwood, its highest branches adorned with bold ivory flowers. Small flocks of birds are common, but they never held still long enough for us to identify what they were. And as for the tiniest critters…Well, there are ticks here. The moment I realized that, it suddenly became rather difficult to focus on writing.

Recent clear cuts are a grim site, but a young patch of forest like this – having rebounded within a few years following mass destruction – is a place of hope. The saplings look young and vigorous, ready for anything, though they do lack the rich character and individuality of their older counterparts. If I could translate the feel of their presence into human-speak, it would go something like this:

Hah!  Here we are, ready to go again. You can’t beat us back, little human. All we need is earth, sun, water and time, and we will be old once again, in ways that you can only imagine.

Their determined growth is an act of defiance, really. A mockery of my anthropocentric view of the world.  It is as if these young trees somehow know they have a gift I do not. After all, they can endure the passage of time through centuries. Some of them may have four hundred years of life and experience ahead. I have – at this point -- maybe forty.

So who loses out, really, when we raze old growth forest? Granted, there are some notable species we may drive to extinction in our hunger for destruction; the northern spotted owl being a prime example. But the trees, left to their own devices for a few hundred years, given some peace and distance from us bothersome humans, will weave their magic once again. They will rebuild their forest, slowly and inexhorably, filling it with beauty, mystery and complexity. By the time they have finished, we will no longer be around to see their work of art.  Indeed, our legacies as individuals -- and perhaps even as a people -- will have been long forgotten.

We often think of conservation as something we engage in for the good of future generations; and in a very deep and important way, it is. Yet there are many aspects of conservation that are not just about the future, and Old Growth Forest is one of them. Once these ancient forests are gone, they will not return.  Not in our lifetime, not for our children, nor for our children’s children.  Not for many human generations to come. 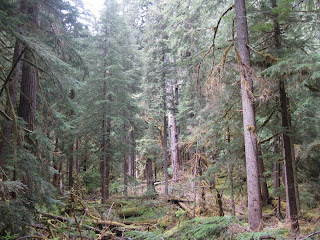 This is the sixth installment in my weeklong series as a Writer-in-Residence for the Andrews Forest Long Term Ecological Reflections Program.

Many thanks to Rafael Aguilar Chaves for the photos.
Posted by Karin Rita Gastreich at 11:28 PM