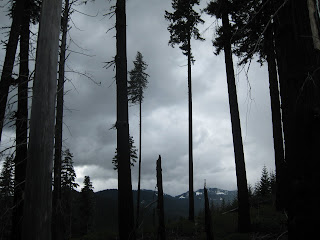 As part of the Andrews Writers Residency, we are required to visit and reflect upon three sites in the experimental forest; a fourth site is optional. Two of these four sites have undergone some sort of intervention; in other words, wood has been extracted from them. Andrews is an experimental forest, after all, and one of the ongoing goals of research here is to evaluate the impact of different forms of harvest on the forest ecosystem.


Yesterday I wrote about the old growth forest, but that was only half of the story I had to tell. On the day we visited old growth, we also stopped by the fourth ‘optional’ site, as it is situated more or less along the same road, albeit much further up along the ridge. This site is an experimental plot where, from what I understand, wood was harvested in a selective fashion, and then the remaining forest burned in order to simulate the effect of natural fires on forest regeneration.

The feel of the site is -- as you might imagine -- completely different from old growth. The primary forest is characterized by countless shades of green, which when the sun shines are further diffracted into even subtler tones along a broad spectrum from very bright to very dark. But on the burned landscape of this fourth reflection plot, colors are not subtle and the vast shades of green have been distilled into a few dominant tones that tend toward sage. 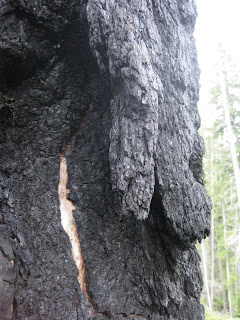 The dense stands of trees of various ages and sizes have been replaced by a handful of giants with blackened trunks – though black is not quite a dark enough word to capture the color of the charred bark. ‘Ebony’ is too beautiful; ‘stygian’ too malevolent; ‘charcoal’ too tame. ‘Raven’, perhaps, would capture the color. But does anyone ever say ‘a raven-scorched tree’ or ‘a tree scorched to raven’?

Anyway. These giants with raven-scorched trunks are still alive, which I find remarkable. Somehow their thick shaggy bark bore the brunt of those deadly flames, protecting the living tissue in the cortex and allowing the trees to maintain admirable crowns of verdant needles. (Do trees have a way of feeling pain, I wonder? Can they, in the absence of a nervous system, still sense their bark melting, bubbling, steaming, smoking, crackling under the lick of fire?  The Magas, I think, would say 'Yes'. )


Despite the persistence of these old trees, the canopy as a whole is wide open, and that makes for a very different kind of understory, in which there is nothing ‘soft’ or ‘subtle’ as we might find in the old growth forest. The mosses and ferns have vanished, replaced by stiff prickly bushes and young firs just beginning their multi-centennial climb toward the sky. Underfoot crunch countless bare branches bleached white by fire and sun, like the scavenger-cleaned bones of some old and forgotten battlefield.

I was pleased to find, in this field of destruction, plants belonging to one of my favorite families the Ericaceae (this is the same family that gives us the blueberry), growing in abundance under the mountain sun, their clusters of white bell-like flowers bringing a spot of cheer to an otherwise bleak landscape.

More than indignation, what I felt when comparing this razed patch of forest to the old growth was disappointment, a frustrated desire to find something more. If I were to return in a hundred years (or two or three), after the forest has been allowed to regenerate, that ‘something more’ would probably there, thriving in the quiet hum of a dense forest understory.

I have to admit, a single blog post is not enough to capture a day in the Andrews Forest. I’m trying to give simple snapshots here, and even so I’m two days behind on all the wonderful experiences that could be shared. Yesterday we hiked a watershed trail up through yet another tract of stunning forest, saw a multitude of fascinating creatures and then nearly got ourselves lost; well not entirely lost, but certainly headed in a direction we hadn’t quite planned. All I can say is: Thank goodness for Forest Service radios. Then today, I visited the third reflection site on Lookout Creek, which was just marvelous. That will be the focus of an upcoming post, either tomorrow or the day after.

This morning, I started on a fantasy fiction short for Briana, a scene from her youth set in the forests of East Selen. I’d give you a preview of that, except I’m not quite sure where it’s going to lead yet. Still, it’s a great feeling to take some of what I’ve experienced here and begin to channel it into a story. Writing about the magic of the forest allows me to experience it all over again.


This is the third installment in a week-long series on my experiences as a writer-in-residence at Andrews Forest in the Cascade Range of Oregon.

Many thanks to Rafael Aguilar Chaves for the photos.
Posted by Karin Rita Gastreich at 9:04 PM