Deep History: The story of Moisehen and its surrounding kingdoms 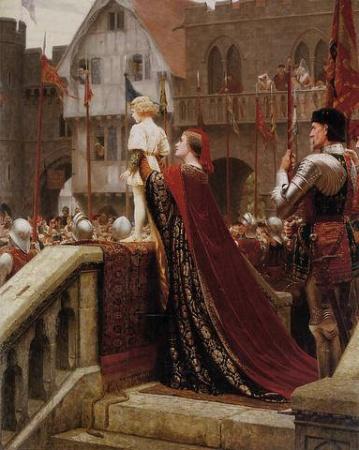 Those of you familiar with my work know by now that history is a fundamental thread in the underlying fabric of Eolyn's world.  Everything that happens in the present moment has flowed somehow from events of the past.

Even so, I spend very little time putting "backstory moments" into my narrative.  Rather, the history of Eolyn's people is revealed through conversation and shared experiences.  As a result, the reader receives different versions of history, depending on who is telling the story, and there are swaths of history that are never explicitly revealed, even though they impact each and every character in very important ways.

Once in a while, I like to use this blog to touch upon historical themes that are important to Eolyn's world, even if they are not readily apparent in the novels.  Today I want to talk a little about the deep history of Moisehen and its neighbors, Roenfyn, Galia, the Land of the Syrnte, and the Kingdoms of the Paramen Mountains.

Early in the story of Eolyn, the legend of the origin of magic is told.  This is one of the defining historical myths of Eolyn's people. The discovery of magic is attributed to Aithne and her lover Caradoc.  By bringing magic to their people, Aithne and Caradoc transform history.  They also ignite the wrath of certain gods, and a rift develops between those gods who support the use of magic (represented by Dragon), and those gods who do not (represented by Thunder). 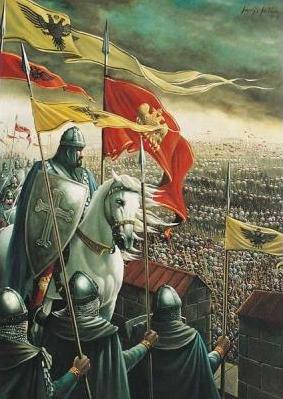 Generations later, this rift manifested itself in a long and terrible war between the People of Thunder, who refused magic in all its forms, and the People of Dragon, who embraced magic. The War of Thunder nearly extinguished the followers of Aithne and Caradoc. It was not until their darkest hour, when all hope was nearly lost, that Dragon appeared to the mage Caedmon and taught him how to use magic in battle.

It's important to note that this was a cultural revolution, of sorts.  Until Dragon appeared to Caedmon, it was strictly forbidden to use magic as a destructive force.  The advent of the mage and maga warriors, while turning the tide of the war, also introduced important tensions that would persist for centuries to come.

But I digress.  Between Caedmon's magic and the military prowess of the warrior chief Vortingen, who aligned with the People of Dragon, the People of Thunder were not only defeated, but greatly weakened and reduced in numbers.  What remained of their tribes united to establish the small and relatively inconsequential  Kingdom of Roenfyn.

The People of Dragon, on the other hand, flourished in the centuries that followed.  Three principle kingdoms were born from their numbers. To the east of Roenfyn, the warrior chief Vortingen founded a line of kings in the land-locked and forested realm  of Moisehen.  To the west and south, the powerful wizards of Galia established their own mysterious traditions in a terrain where the fury of volcanoes mingled with the unpredictable moods of the open sea.

Subsequent migrations from Moisehen led to a mixing with the tribes of the eastern deserts and the emergence of the Syrnte empire, with its elegant peoples and sophisticated cities.  The people of the Paramen Mountains also share a common history with Moisehen, and among all the kingdoms, probably maintain the closest ties with Eolyn's people in terms of bloodlines and cultural traditions. 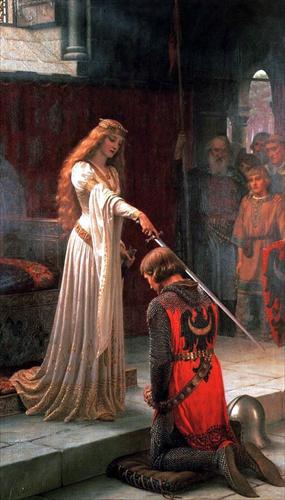 The novel Eolyn focuses on the reconciliation of two important factions within the magical tradition of Moisehen:  the Daughters of Aithne, also called magas, and the Sons of Caradoc, also called mages.  Eolyn is born toward the end of a devastating civil war that pitted magas against mages, and that destroyed a millennial balance between male and female magic.  This process, wrought with turbulence and uncertainty, is embodied in Eolyn's relationship with Akmael, which grows from innocent friendship to burgeoning love, and then, tragically, into doubt, suspicion, open confrontation, and warfare.

As Moisehen struggles to find peace with itself, the kingdom is consumed by the broader canvass of history. High Maga brings the Syrnte people back with a legitimate claim to the throne occupied by Akmael.  Daughter of Aithne expands the struggle to include Roenfyn, Galia, and the Paramen Mountains.  In all three novels, beneath the sagas of the individual characters runs the deeper tragedy that a people once united in history and purpose are now pitted against each other in a vicious struggle for power.

But with that tragedy comes hope, and as each character plays his or her part in history, we begin to see hints of a world that might at last hold reconciliation, not only between the Sons and Daughters of Aithne and Caradoc, but ultimately between the People of Dragon and the People of Thunder.

Of course, such an achievement would require the gods themselves to be at peace.  Could such a thing be possible?  Only time, and the novels, will tell.


~*~
Next week's preview from HIGH MAGA will include a scene from Eolyn and Akmael's first encounter, some four years after they faced each other as rivals in the Battle of Aerunden.
If you missed last week's preview, click here.
﻿
Posted by Karin Rita Gastreich at 6:00 AM