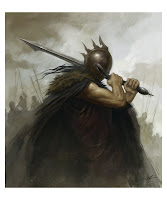 I usually start these posts with some sort of digression before getting to the topic at hand, but this week I put my pre-topic digression in my livejournal blog.  It's entitled "Why I love my small press". If you'd like to have a look at that, click HERE.

Now, on to this week's topic:  Warrior Magic

In Chapter 9, the girl Eolyn says to her friend Akmael:  "I don't understand how magic can be applied to warfare.  Magic should be used to create not to destroy.  And in war one always has to destroy.  How is it possible for a mage to become a warrior?"

Young Akmael, a warrior at heart, responds with great enthusiasm, demonstrating ways in which magic might be incorporated in a fight.  Mage warriors can perform maneuvers that seem to defy the rules of gravity, he points out.  They can also alter the path of flying objects.  "A skilled warrior mage detects the fears of his enemy and turns them to his advantage. . . A warrior mage trained in High Magic can use his staff to invoke a death charge. . . "

In the end, despite Akmael's best efforts, Eolyn is unconvinced.  Her challenge to Akmael in Chapter 9 is an expression of an essential part of her nature.  For her, magic and death will always be at odds; one should not be used to invoke the other. She will remain firm in this conviction for years to come, even though she will be compelled by circumstance to participate in war and use her magic to kill time and time again.

Despite Eolyn's personal misgivings, the use of magic in war has long been a tradition in Moisehén.  According to legends that are never fully articulated in the novel EOLYN, the first mage to become a warrior (or depending on whose story you listen to, the first warrior to become a mage) was Caedmon.  Some traditions claim Caedmon was a descendent of Aithne and Caradoc; others give him a separate heritage.  But all legends agree he was a contemporary of Vortingen, the warrior chief who established the line of kings from which Akmael descended.

As you may remember from last week's post on High Magic, the discovery of magic by Aithne and Caradoc led to a division among the gods, between those who supported the use of magic by humans and those who did not.  This division would, generations later, manifest itself in a bitter and long war between the People of Thunder, who saw the use of magic by humans as evil, and the People of Dragon, considered the early predecessors of the modern kingdoms of Moisehén, Galia, the Mountain People (also known as the Paramenites) and the Syrnte.

It was in the darkest time of this epic war, when the People of Dragon had all but lost their struggle to avoid annihilation by the People of Thunder, that Dragon appeared to Caedmon in its true form and showed him how magic could be used on the battlefield.  The revelation turned the tide of the war.  Caedmon and his mage warriors united with the warrior chief Vortingen, and together they defeated the People of Thunder, securing extensive territories in which magic would be practiced for generations to come.

Ever since that time, Moisehén has sustained a class of Mage and Maga Warriors, who protected the territories of the kingdom without fail until Akmael's father Kedehen assumed the crown and the Magas rose up against him.  As a result of that civil war and its aftermath, the tradition of warrior magic in Moisehén imploded, leaving no maga warriors and only a handful of mage warriors in its wake.  Akmael and his tutor Sir Drostan are among the very few left who conserve this tradition.

Eolyn's own mother, by the way, was a maga warrior who fought against Kedehen.  Her name was Kaie, and she appears in Chapter 1 of EOLYN.  If I ever write the prequel to EOLYN, Kaie will figure prominently in the story.

That's all for this week's post.  I hope you enjoyed it, and that you'll be back next week for more.
Posted by Karin Rita Gastreich at 2:18 PM